Farmer Tip: Keep Up On Farm Tasks To Avoid Catastrophe

After learning the ropes of farming, the two saw a need for scaleable container farms, and started Modular Farms.

Now they consult with and build scaleable farms for growers in any environment.

Like all entrepreneurs, however, they had to learn a lot of lessons along the way. Eric argues that one of the most important traits for entrepreneurs is tenacity.

"When you’re entering an industry with little to no experience, you need to expect to have a lot of tenacity and courage.”

Tenacity and courage are traits we see in all of our farmers as they boldly claim niches in their markets and use learning experiences to improve their farms.

We got on a call with Eric Amyot recently, and he remembered back to his struggles as a new farmer. One incident in particular revealed the need for good farm task habits.

At the time, he and Eric Bergeron were new farmers with no experience. “I didn’t even know what a drip emitter was,” says Eric A.

The top set of skills that he needed to learn were housekeeping skills.

Some farmers have good housekeeping habits naturally, but it's easy to forget checklists and small farm tasks in the hustle of daily farm life.

Unfortunately, even the simplest tasks, when forgotten, can have catastrophic results!

“If you’re not paying attention to what you’re doing, you aren't keeping a tidy house, and you neglect even the simplest of tasks, things can go wrong very quickly,” said Eric.

One winter day, that played out when the entire farm was frozen and killed.

"Human error plays a huge part in even the most controlled systems," said Eric.

"So if you leave for a long weekend in the middle of winter and it’s -30º (F) outside, and you forget to turn your lights on - which are the only heat source in the farm - things tend to freeze pretty quickly."

The result for Eric, who ignored notifications on his phone during family time, was disastrous.

"Coming back after a long weekend... to find out when you open the door that everything in your farm is dead and it’s going to take you four months to get up and running - that would be a really good example of chaos.”

While a moment or two of chaos is inevitable for most new farmers, Eric hopes that his example will help guide new farmers to avoid similar problems!

How to avoid simple mistakes

One way for new farmers to eliminate the majority of forgetful mistakes is by using checklists to build intentional habits.

Most farmers have a routine when they check into the farm, conduct maintenance, and then check out again. Having written checklists (a dry-erase clipboard works great) solidifies these routines.

Checklists are especially important when you have more than one person working in the farm.

Get started building your own farm checklist here. (Then modify it for your farm!)

Maybe you're not sure what's normal for maintenance. New farmers can get educated about farming techniques and maintenance through Upstart University, where presenters explain how farm businesses function and how to run them effectively. 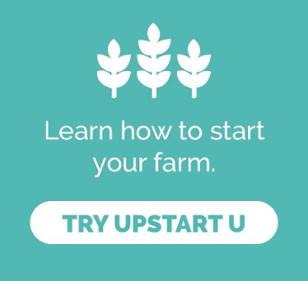 Upstart University is a self-paced guide through starting a farm business, offering courses on business planning, choosing a technique, and even selling at different markets. You can try it out for free today.

Learn about farm management and operation at Upstart University here.

>>> If you'd like to learn more about what the Erics are doing with Modular Farms, be sure to check out their website!

Psst... Don't miss out on 12 Days of Deals at the Bright Agrotech shop!