Marketing a farm isn't easy for every farmer, and Nick Burton (the Grower's Coach) understands that better than most.

He has also overcome many of the struggles of social media marketing for small farmers. In fact, Nick is a farmer himself - he grows both hydroponically and in the soil.

Now Nick is partnering with Upstart University to make your entrance into social media painless.

As he has worked with small and new farmers to get them set up with social media, Nick has noticed several recurring myths. These misconceptions bar many farmers from using social media effectively.

Here are the 7 most destructive myths about social media:

Many farmers avoid social media and other marketing because they don’t want to be spammy. We've all experienced annoying umbrella advertising that intrudes and bothers us. Some farmers wrongly assume that this is the only type of marketing there is - but how you approach marketing is your choice.

a) You get to decide how you approach marketing. You can offer value instead of spam!

b) When people follow you, they're signing up to see your posts. That's not an intrusion. Nick explains:

Marre Seleska from Green Wolf Vertical Farm is a great example of offering her followers value as part of her marketing strategy:

Say you have 300 people following your farm on Facebook. You post a link to a farm update describing the new crop selection and farmers market appearances. Only 20 people click through. Many farmers take this as a sign that 280 of their 300 followers don't care.

This assumption doesn't take into account all the factors and can be destructive to your view of your farm and your customers.

If you think only 20 people are sincere about your farm, it becomes too easy to give up or ignore your whole audience. This can make you blind to opportunities and sabotage your networking. (It's also discouraging!)

The truth is: even if someone doesn't click one time, that doesn’t mean that they don’t want to ever. If a relative only likes one of five photos, does that mean they only like you 20%? No - they were probably just busy or distracted this time. Also, social media feeds can move very quickly, and sometimes people just miss your post.

Myth 3: You have to be extroverted.

Both sales and marketing suffer from the myth that you have to be extroverted to succeed. This causes many farmers to write off both efforts because they think that they're inherently inadequate for success.

But marketing is about human relationships, not just extroverted relationships. Nick's advice? To create relationships with your customers, a) build off of what's easy for you, and b) keep the conversation relevant.

“They can find that one person at market that they do connect with,
and start piggy backing off those conversations.”

Start with the easy conversation. Then apply it to the next person. (What topics were they interested in? Talk about that topic again. What caught their eye? Make a comment on it.)

What does it mean to keep things relevant. It's simple: don’t talk about stuff they don’t care about! They didn’t come to your farm stand to talk politics, religion, or to hear your sustainability rants. They did come to hear about your farm and your produce. Most people will want to talk about the same group of topics.

Tom Deacon from Fable: From Farm to Table does a great job of staying on topic and keeping his followers interested.

In short: you don’t have to be charming and extroverted, but you do need to be able to read people.

Myth 4: You can get by with a flip phone.

While most of the myths up to now are about people OVER-estimating what they need to do, this is one where people underestimate what is needed.

When it comes to social media, you do need the basic tools of the trade. You need to be able to get to the platforms and navigate them. Luckily, platforms like Facebook are accessible by a computer and aren't difficult to learn. Others, like Instagram, require a device. (Not a flip phone.)

Perhaps the most tempting part of this myth is that it means one less thing that you have to learn. It took me a couple months to get used to using a Mac computer, and using a smart phone also has a learning curve. Like any learning curve, it can be frustrating at times.  This is one learning curve that will be worth it, if you use it well!

Some new farmers believe that social media marketing is futile because people don't really care about their story. Will sharing tidbits about the farm really help?

What they fail to understand is that local food and the values behind it are near and dear to the hearts of many people! They want to know your story and how it affects their life. That's why they've connected with you. Don't turn them away when they want to know more.

Myth 6: It’s better to not try than to try and fail publicly.

Everyone who first started on social media had an awkward first few posts. They were talking to the wrong audience, they used a link wrong, or they missed out on opportunities to use the platform well. Let's be honest - you'll probably make a mistake or two when you first start!

But the great thing about social media is that it moves quickly, and a few small mistakes just don't carry much weight in the grand scheme of things.

In the end, the fact of the matter is that you'll never get good at social media if you don't start somewhere.

Myth 7: You have to spend a lot of money.

You can buy online ads and "boost" posts with money, but this isn't necessary. I'll let you in on a secret: most Upstart Farmers have a "marketing budget" set at $0 or close to it!

Most social media platforms are free, so you can participate and get the benefits without spending money.

There are also tons of hacks and tricks out there to get the most out of a small budget. "Guerilla marketing" techniques are constantly being developed to help low-budget business owners just like you!

How to get started

Now that you know what to look for, it's time to get started! We have a 3-part webinar series to help you start an effective social media marketing strategy.

The first webinar will include:

Each webinar costs $9.99 to cover costs, but is free for Upstart University students. (Upstart U memberships are also $9.99 ... coincidence?)

Get Nick's tips in the upcoming webinar. 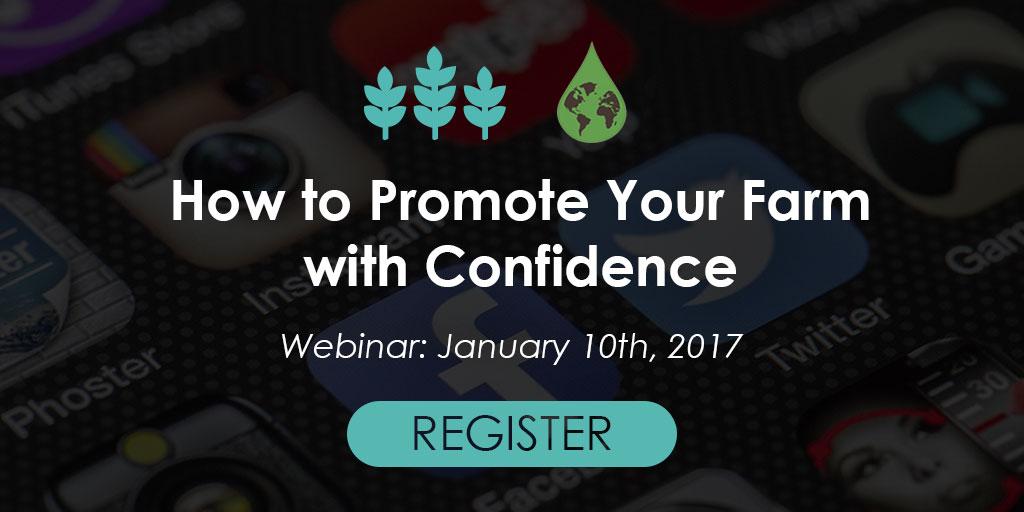 Want to get a head start? Follow some farmers.